The nation’s preeminent job networking site is harnessing its vast databanks to join the crowded university and college rankings game, in its case by ranking colleges and universities based on the proportion of their graduates who get “desirable” jobs.

Detailed job-placement information by institution is generally not available, including from colleges and universities themselves, which typically base their reported job-placement rates on the results of surveys of alumni who may or may not respond in numbers sufficient to make the figures meaningful.

But LinkedIn has 300 million members worldwide, through whose information it has sifted to determine which institutions’ graduates get jobs at the most desirable companies with the lowest turnover, providing it to prospective students in searchable form and as a ranking. 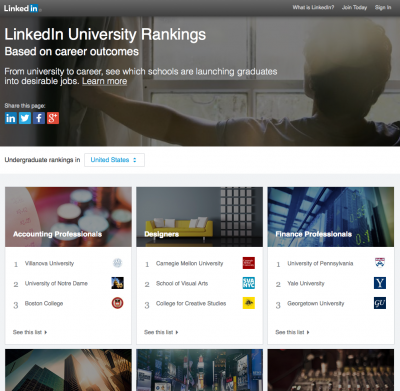 “What we’re doing is we’re giving them access to information that they haven’t had from other places before,” said Crystal Braswell, a company spokeswoman.

Using a complex algorithm, LinkedIn determined which companies were most desirable by analyzing its members’ career choices. If a member leaves one company in a particular profession to work at another company, the second company is assumed by LinkedIn to be more desirable. So is a company that does the best job of keeping its employees from leaving.

Since members also list their alma maters, LinkedIn can calculate the proportion of graduates from a given university who work at what it has determined are the most desirable companies in their fields.

“These are really the best schools at launching graduates into not just any jobs, but desirable jobs,” said Itamar Orgad, who heads up the project. And while LinkedIn does not track members’ pay, he said, “You can assume that this correlates to things like salaries and not just being a better professional, but how to have a better life. We know we’re literally the only destination that has this information.”

Universities and colleges may not be quite so excited about these newest rankings, especially as debate rages about whether the purpose of a higher education is exclusively vocational.

But Orgad said the institutions can benefit from them just as much as students can.

“The amount of insight they have about what their graduates do post-graduation is really limited,” he said. “I’ll be happy if this makes everyone much more motivated to make sure that more students find jobs they’re happy with.”