In May, the California-based nonprofit EdSource released a report that highlights just how financially strapped the Golden State’s schools are. The report, “Schools Under Stress: Pressures Mount on California’s Largest School Districts,” found that childhood poverty rates have increased in 27 of the state’s 30 largest districts since 2007, summer programs have been scaled back, school days have been cut, class sizes have ballooned and the number of school counselors has shrunk. (Disclosure: EdSource’s executive director, Louis Freedberg, is a member of The Hechinger Report’s advisory committee.)

Fresno Unified, the fourth largest school district in California, has the state’s highest childhood poverty rate, according to the report. Nearly one in two students lives in poverty there.

Fresno’s superintendent, Mike Hanson, took office in 2005 with the district facing state takeover because its finances were in such bad shape. Despite significant state cuts, Hanson and his team managed to avoid takeover—in fact, they increased the number of counselors, minimized teacher layoffs and built a centralized kitchen that cooks 120,000 meals daily so students who come to school hungry can have at least one hot meal a day. High-school graduation rates increased from 66.4 percent in 2010 to 70.1 percent last year, according to Hanson. He created a retirement incentive that led to 700 teachers and administrators retiring before the 2011-12 school year, which saved the jobs of many younger teachers.

The Hechinger Report spoke with Hanson about what things are like on the ground in Fresno schools, and how the district has managed not only to stay afloat but to thrive in tough economic times.

Q: The EdSource report mentions Fresno as the district with the highest childhood poverty rate in California. Your district was and is in deep financial trouble. How has that affected teaching and learning, and what have you done to combat these challenges?

A: When I started in 2005, I immediately hired Ruth Quinto as my deputy superintendent. We entered at a time when everyone else was booming and on the upswing, and Fresno was crashing and burning and just about over the edge of the financial cliff.

People will marvel that in the last two budget rounds, we didn’t lay anybody off. How could you have done that? I like to say the benefit of being in terrible fiscal shape in 2005 was that we had a three-year run-up on what has become a calamity for everyone else. 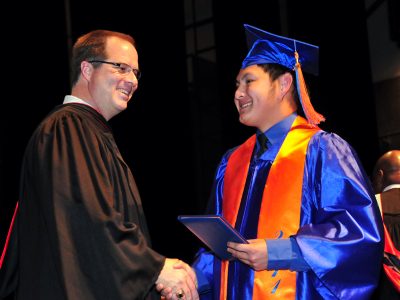 We are the poorest big city not just in our state but in many reports we’re one of the poorest in America. We are intent on trying to use our tax dollars as an investment in the community. So what we did was give people incentive to retire, and then they stay in their homes with an extra $1,000 a month that they are either spending at Home Depot fixing up [their] home or on [their] grandchildren. And that also clears up space for someone else who’s a second-year teacher not to be laid off. So that’s been a win-win.

Now as far as kids, when you clear out 700 employees to make your budget balanced, that has an impact. So class sizes increased from 20-to-1 in our K-3, and we went up to 26-to-1 in K-1 and 30-to-1 in second and third grade—a rather dramatic shift. We’ve maintained a lot of our investment by putting things in place that we knew we could sustain. When I arrived, we had a student-to-counselor ratio of 992-to-1. We got that down to about 420 kids per counselor and we maintained that through all of this downturn. That’s allowed us to get better services to kids and get more kids eligible for college in our local college of Fresno State. That doesn’t mean it’s great. It means that it’s relatively better than it could have been …

Kids are coming with more baggage. It’s more problematic. They’re more stressed. They’re more distractible, and I think we’ve done a decent-to-laudable job systematically of trying to put some things in place that in retrospect help blunt the poverty impact, but I will tell you that classroom-by-classroom that’s not uniformly thought by teachers. They will still look at the third-grade kid who witnessed a beating at home the night before only because money is a bigger issue than it once was, and the kid can’t shake that out of his head and he’s struggling to pay attention and understand what he is being taught in literacy class. That stuff is tangible, palpable and real. It has challenged our staff like they’ve never been challenged before.

Online learning is often seen as a way of cutting costs for districts that are struggling financially. How are you planning, if at all, to incorporate online learning into Fresno Unified?

We’re actively working now on building a blended-learning environment. We took our summer learning time and extended learning time, and in the time we were cutting budgets [we] had 5,000 kids in summer school a couple of years ago. We changed the rules for what would earn you the privilege of being in summer school, and we now have over 14,000 kids at a time when everyone else is getting rid of summer school. Some of that time is online coursework and moving into blended learning … We’ve built our own student data system and have piloted wireless in classrooms, and [we] are trying to see what kind of reach we have from our school buildings so that in off hours it can benefit the neighborhood. We haven’t borne a lot of fruit on that yet, but it’s not something we’re blind to.

What insights have you gained as far as how to deal with this fiscal crisis that you think other districts can learn from?

There’s nothing really flashy or sexy to this. Something our mayor said in [her recent] State of the City address is appropriate to inject here. She said to the entire community and the leaders there, “This isn’t easy work we’re doing. It is very hard work, number one. And number two: we can’t quit.” All those things we talked about compounding the problem for us are true, but we can’t quit. We’re going to determine the future for central California and for the state, and we believe that as goes California so goes America at some point over the next five to 15 years. So we’re feverishly working at fixing the districts right now. We recognize that classroom instruction matters, and we always keep that as our bottom line. You have to be networked with the right people so you can learn from them as fast as possible. I have no interest as a superintendent as being the guy who gets it right first. I have all the interest in being the guy who gets a whole bunch of things more right, faster … All we’re trying to do as big institutions is to network like people do and teachers do in a school. Good teachers work together.

The interview has been edited for length and clarity.