From the day they turned up for orientation at California Polytechnic State University, freshmen were bombarded by a music video set to the catchy tune of the hip-hop hit Fancy.

This version, though, was very different from the original sung by Australian hip-hop artist Iggy Azalea. Set in a Cal Poly classroom, it featured bored-looking students slowly being spurred — in a blaze of enthusiastic red, white and blue — to exercise their right to vote.

“Students, voice your vote and let the whole world hear it,” went the rap, hosted on the university’s official website and part of a get-out-the-vote campaign that also used posters, flyers, notices on desks and tables in the library and dining halls, and an online voter registration link featured prominently on the class-registration portal.

It was part of a growing movement, quietly supported by universities and colleges, to increase student political clout and discourage elected officials from making the kinds of budget cuts and other high-stakes changes that are buffeting higher education. 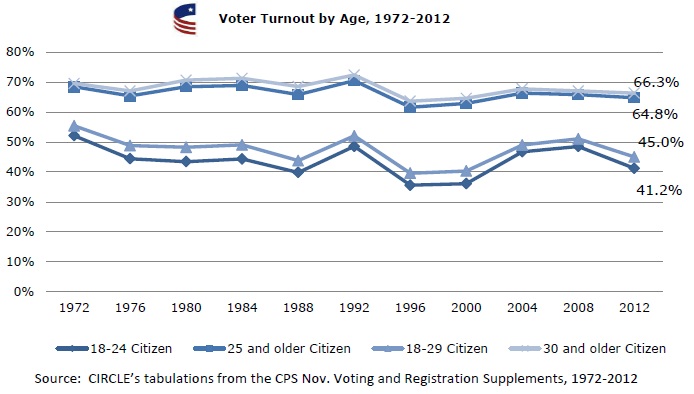 Related Colleges that pledged to help poor families have been doing the opposite, new figures show

For all of this effort, the outcome was lackluster. Only 1,400 of Cal Poly’s 19,000 students, or about one in 14, registered to vote, said Joi Sullivan, student government president, who helped orchestrate the campaign. That was even lower than the nationwide one-in-five rate at which college-aged Americans went to the polls in November.

“With students, the focus is your education, it’s finding a job, a career, and there is this lack of understanding that in order to change a system you have to work within the system,” conceded Sullivan, a political science major. Plus, she said, “We’ve grown up in an era of consistent gridlock. It’s hard to understand that our votes really make a difference.”

That difference is becoming critical to universities and colleges, which face political challenges everywhere, from city councils to state legislatures to Congress and the White House, said George Mehaffy, vice president of the American Association of State Colleges and Universities, or AASCU.

He contrasted the anemic student vote to the robust political engagement of retirees.

By contrast, he said, “Legislators in general don’t fear students because they know their track record is not particularly good” in terms of voting. “But I’m starting to hear rumblings of some growing awareness that political leverage might be useful for students as they confront rising tuition and inexorable growth in costs.”

Now student-voting advocates are turning their attention to 2016 with a new sense of purpose.

Related Poorest states cut what experts say could help the most: higher ed

In addition to longtime initiatives with pop-culture credibility, such as the nearly 25-year-old Rock the Vote, aggressive new voter-registration operations have cropped up to take on student political apathy.

One, TurboVote, teams up with universities and colleges to make it fast and easy for students to register online, supplies them with absentee ballots and even texts them when it’s time to go to the polls. Cofounded by a pair of Harvard grads, it has grown from having one partner university at the beginning of 2012 to 220 now, and was featured prominently at a conference of university government-relations officers in New Orleans in December.

“Obviously there’s a huge amount of work to do,” Sam Novey, TurboVote’s partnerships director, said at the nonprofit’s headquarters in a technology incubator space in a high-ceilinged building in Brooklyn where staffers on tattered couches pecked away at laptops under handwritten inspirational sayings taped to the walls (“We have it in our power to begin the world over again” — Thomas Paine).

TurboVote uses technology to lower the barriers presented by the complicated process of registering to vote and casting ballots, especially for young people who have never done it before and who move frequently and may live in dormitories whose addresses voting authorities don’t recognize.

“It gives people who were going to vote anyway an easy access to voting, and for those who might not, gets them across the line,” Novey said.

Urging students across that line presents a predicament for colleges and universities, which are banned from taking political positions or supporting particular candidates or causes. Even when writing the script for the voter-registration hip-hop video at Cal Poly, “We went through this process of making sure that every single word was neutral,” Sullivan said.

“Our legislators are going to be responsive to voting blocs they know are at the polling places.” Jared Giarrusso, associate director of government and community relations, University of California at San Francisco

When San Francisco State University pressed its students to register and vote — buying ads that popped up on smartphones within a two-mile radius of the campus, among other measures — it had to carefully avoid appearing partisan, said Jared Giarrusso, associate director of community relations, who managed the effort.

“We’re a state-funded institution,” Giarrusso said. “We can’t ever be perceived as favoring any campaigns, any issues, any candidates.”

That’s fine with him, he said. “It doesn’t matter at all to me who any of our students decide to vote for. What matters is having the reputation of them voting. Our legislators are going to be responsive to voting blocs they know are at the polling places.”

Yet so sensitive are some colleges to the perception of taking sides — and to criticism in general of ideology creeping into classrooms — that they shy away from persuading their students to vote.

In fact, CIRCLE research shows that, while young voters in the midterms did favor Democrats over Republicans by 55 percent to 42 percent, they were more or less evenly divided in their registered affiliations, with 37 percent Democrat, 31 percent Republican and 31 percent independent.

“College students are ideologically diverse, so if people think that getting college students to vote is a way of getting Democrats to vote, that’s mistaken,” Levine said.

Just getting students to vote at all, however, remains a formidable challenge.

“It’s a population that’s got a lot to complain about and isn’t organizing politically,” Levine said.

Montclair State University in New Jersey, for example, managed to have itself declared its own voting district. “We wanted our students to be able to roll out of bed and vote,” said Shivaun Gaines, director of government relations. “But they’re still not voting.”

Even when they do vote, they may or may not affect elections in the way colleges want. When the president of Salisbury University in Maryland sent an email to students encouraging them to register to vote, 90 signed up the same day, said Robby Sheehan, who is both the university’s director of government and community relations and interim managing director of its Institute for Public Affairs and Civic Engagement. Yet the local member of the Maryland House of Delegates who chaired the appropriations committee — a close ally of the university who Sheehan said had helped secure $200 million for new buildings — lost his reelection bid in November.

Sheehan acknowledges that he couldn’t tell students how to cast their ballots. “I was very careful not to tell people to vote for him, but to encourage people to stay informed,” he said. “We don’t overtly go out there and say we want you to vote because of higher education. But it does underlie this.”

In the end, he said, “As long as they’re voting, that’s all that we care about.”