Earlier this summer, we published a map of high school graduation rates by district across the United States. We’re now breaking it down and exploring trends in different states and regions.

It should come as no surprise that urban districts tend to have lower graduation rates than suburban ones. They often have more disadvantaged students and fewer resources.

An analysis of 2009 graduation rates found that 60.9 percent of high-schoolers in cities graduated across the country, compared with 75.3 percent in suburbs. (Towns and rural districts were in the middle, graduating 71.7 percent and 75 percent of students, respectively.)

This week, I thought we’d take a closer look at some of the nation’s largest metro areas to see how similar –– and different –– they are.

Related: Graduation rates change by 30 percentage points over a few miles in the Northeast

First up: Philadelphia, where the divide between urban struggles and suburban successes is clear.

These districts are predominantly white and wealthy, according to Marybeth Gasman, professor of higher education at the University of Pennsylvania and director of the Penn Center for Minority Serving Institutions. She attributes part of the difference to the fact that Philadelphia schools have been “starved for money” in recent years, while the suburbs have a large tax base.

“The minute you cross [the city line], you start to see a marked change,” she said. “You start to see plush lawns and really big, beautiful stone homes.”

Contrast this with Chicago, where increases in graduation rates grow somewhat gradually the farther you get from city limits. 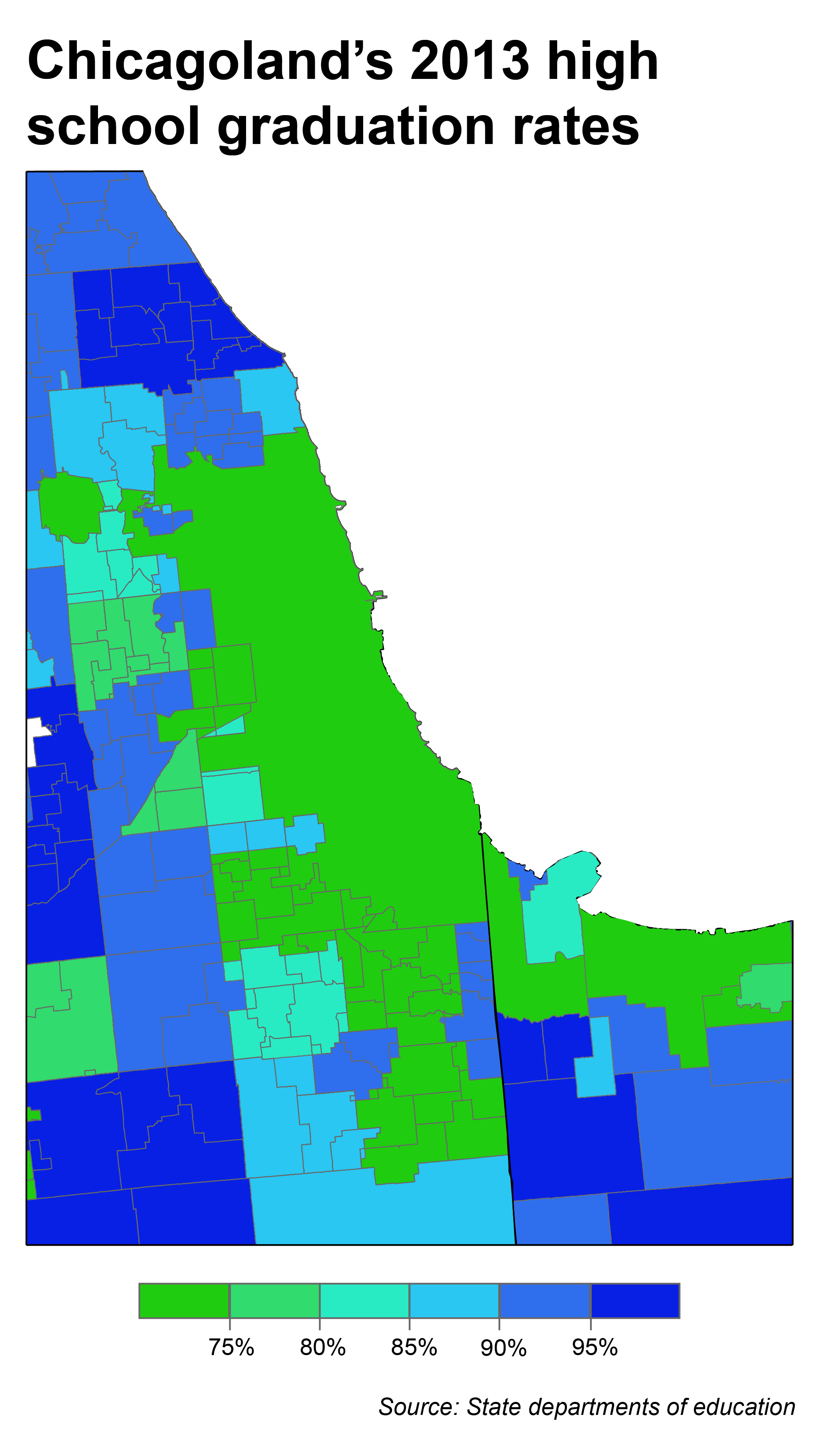 Again, the large dark green district is Chicago Public Schools, with a 2013 graduation rate of 69.7 percent. Notice how there are blocks of high-performing suburban schools with graduation rates above 95 percent in all directions; they’re just not directly next to Chicago. And there are far more districts with low graduation rates surrounding the city.

The suburbs to the south of the city, for example, are populated by low-income families who left Chicago in the 2000s, when the city tore down high-rise public housing and replaced it with mixed income housing, said Elaine Allensworth, director of the Consortium on Chicago School Research.

For yet another example of what this urban/suburban divide can look like, consider the Bay Area. 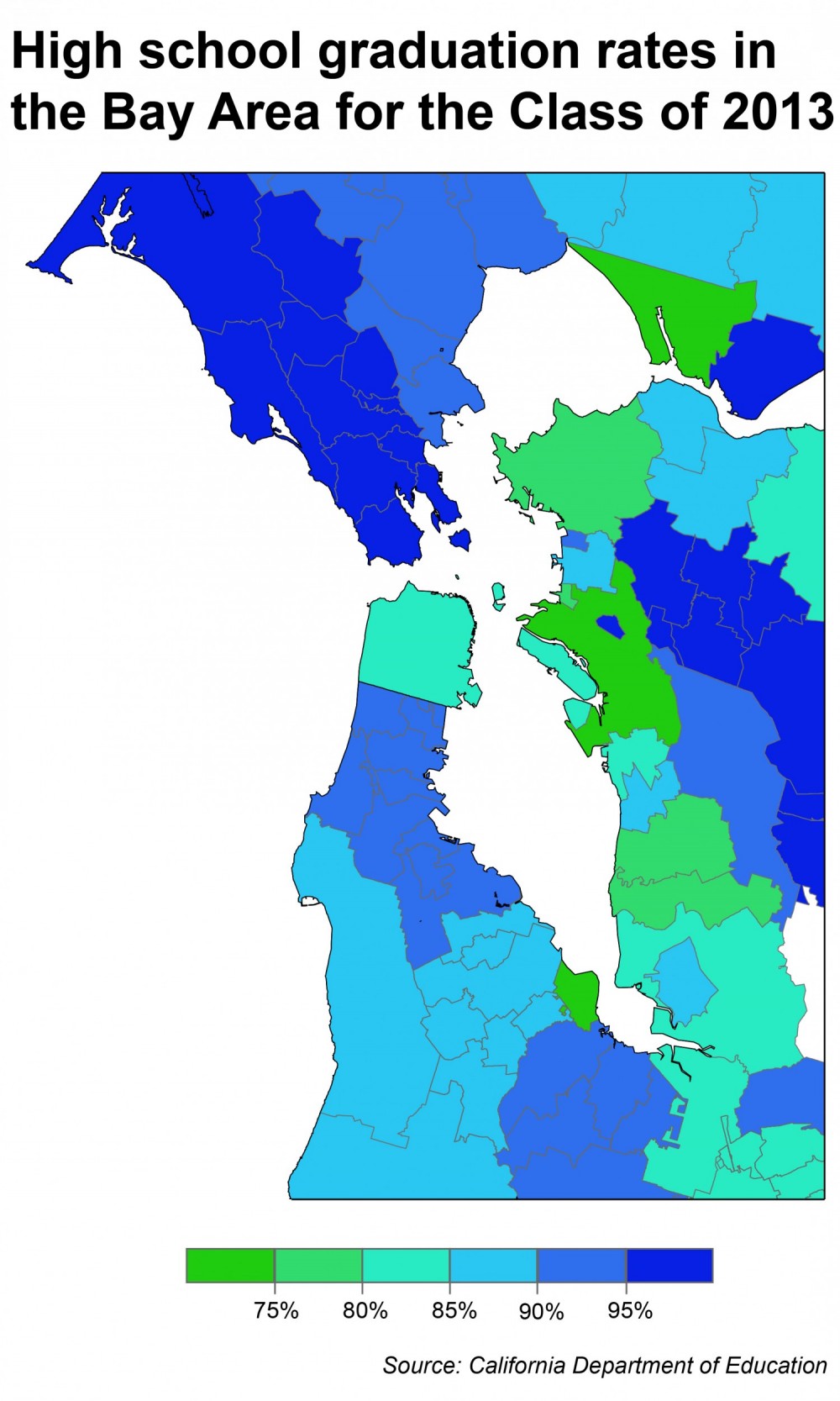 Once more, we see higher graduation rates outside of the cities, but this scenario is a little more complex. For starters, there’s the difference between San Francisco and Oakland, which is the poorer of the two cities. Some nearby districts have graduation rates that are better than than Oakland but still lower than San Francisco.

There’s also somewhat of a similar phenomenon as in Chicago, but without the gradual transitions. Directly south of San Francisco lays a cluster of districts with graduation rates between 90 and 95 percent. To the north, there’s a group of districts that all graduated more than 95 percent of students.

Once more, the graduation rates reflect the socioeconomics of the area, said Thomas Dee, a professor at Stanford’s Graduate School of Education. For instance, that dark blue pocket north of San Francisco of full of districts that tend to be less populated and more affluent. “There’s sharp residential segregation by race, by poverty,” he said.

So what does all this mean? Metro areas take shape differently, but consistently housing patterns and economics determine the educational destinies of their residents. I would love to find a major city school district graduating more students than its suburban counterparts because of academic excellence. For now the only city I can find outperforming its suburbs is El Paso, Texas, and there it’s because the suburbs are performing poorly. It appears that the loftier goal eludes the nation.

Keep checking back as we examine other regions of the United States in the weeks to come. Tell us places you want to see covered in the comments or on Twitter: @sarahbutro or @hechingerreport.