Nearly two-thirds of Americans think the higher education system is doing only a fair or poor job of preparing graduates for the workforce, according to a new poll.

So firmly does this belief appear to be held that 60 percent of those polled said employees with some work experience but no college degrees are likely to perform better at a job than college graduates with no full-time work experience. 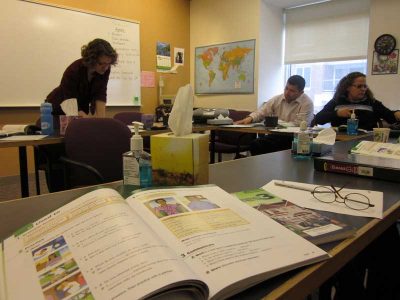 Nearly 90 percent of the public thinks the U.S. higher-education system needs to change for the nation to maintain a globally competitive workforce, a number that has been climbing steadily in each of the three years the survey has been conducted.

Joining a wave of sudden skepticism about widely acclaimed massive open online courses, or MOOCs, only a little more than a quarter of respondents said they think MOOCs provide the same quality of education as in-person classes.

In the survey, conducted for Northeastern University by FTI Consulting, traditional liberal-arts education also continued to lose out to more practical training, adding fuel to an ongoing debate about the very role of college.

The proportion of people who said applied training was more important than so-called “soft” skills such as verbal and written communication and problem-solving crept up to 44 percent this year, from 40 percent last year. The percentage who said it was more important to be well rounded than to have job-specific skills fell from 73 percent to 65 percent.

Nearly 60 percent believe it’s more important to have math, science and technology skills than to be creative or abstract thinkers, a significant increase over the 37 percent who thought so last year.

The poll of 1,000 adults was conducted in mid to late August.

While respondents said they don’t think colleges are doing a good job readying their graduates for the workforce, 79 percent said their own college educations prepared them well for their careers. But more than half said today’s graduates are less prepared than students 10 to 15 years ago.