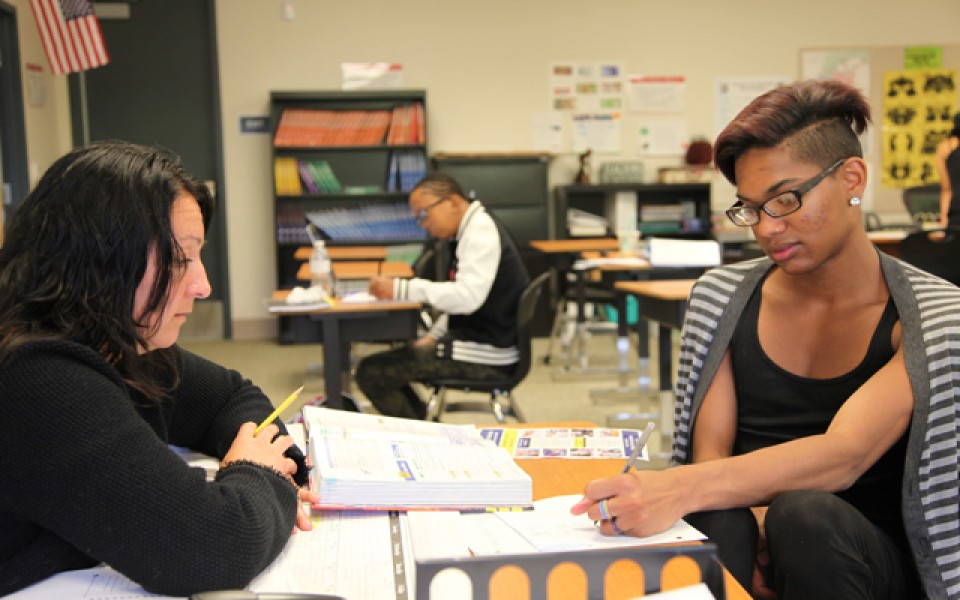 Plenty of credits, no diploma

California's guidance counselor shortage means many kids end up with more credits than they need to graduate, just not the right ones

Jose Salas was in his freshman year of high school when his mother kicked him out because he was gay. He bounced from one friend’s house to another, and to a new high school each year: Hawthorne High in South Los Angeles, Edison High in Fresno, Morningside High in Inglewood. Somehow he stayed on track to graduate. Then, in his senior year, something went wrong.

The high school where he enrolled, Hillcrest Continuation School in Inglewood, placed him in remedial classes usually assigned to students learning English. He took and passed 35 credits worth in the fall semester before dropping out. Any guidance counselor looking at his transcripts would have seen that Salas had passed Advanced Placement English as an 11th grader and didn’t need these classes.

“I have no idea why they placed him in that set of classes,” says Nicole Patch, Salas’s counselor at YouthBuild Charter School of California, where in 2013 he earned his high school diploma at the age of 22 after working as a taxi dispatcher and in a fast-food restaurant. “This is a kid who had the skills. The work was being done. The school should have placed him in government and other courses he actually needed.”

Salas’s story is common, especially in school districts with too few guidance counselors to keep track of the large numbers of poor, transient students who move from school to school and across districts. California ranks worst in the nation when it comes to providing guidance counselors, according to the U.S. Department of Education. The American School Counselor Association recommends a student-to-counselor ratio of 250 to 1. In California, the ratio was 1,016 to 1 for the 2010-2011 school year, the latest for which data is available.

By the time Salas graduated, he had 268.5 credits. He only needed 200 to graduate. All told, the credits mix-up cost him two semesters of high school, according to Patch, since California high schools typically offer 30 credits per semester. Salas said he trusted his counselors to place him in the classes he needed. “It is frustrating that things don’t work that way,” he says.

The problem is most pronounced in impoverished districts, where students are often on the move for a variety of reasons. Foster kids bounce around; others kids move with parents looking for jobs; some are sent to live with relatives until their parents can get on their feet. Any kind of disruption, such as time spent in juvenile hall or leaving school due to a pregnancy, can throw these kids off the path to graduation.

Sometimes students’ transcripts follow them to the next school, and sometimes they don’t. California law requires transcripts to be sent to the new school within two days of transfer. But with so few guidance counselors, mistakes happen. The transcripts may never be sent, or they may get lost, and no one follows up.

Related: Thousands of California kids don’t get past middle school

The problem is not particular to California, according to William Diehl, board chairman of Diploma Plus, a national dropout prevention program. “This can happen anywhere there are large numbers of students who don’t stay put,” he says. “Schools need guidance counselors to check the problem. But when budgets are cut, guidance counselors are the first to go.”

And go they did during the economic downturn, when large numbers of counselors were laid off in California. The state employed 7,839 counselors at the start of the recession in the 2007-2008 school year. That number dropped to 6,191 by the 2010-2011 school year, the latest for which data is available, according to Kathleen Rakestraw, the director of communications for the American School Counselor Association. 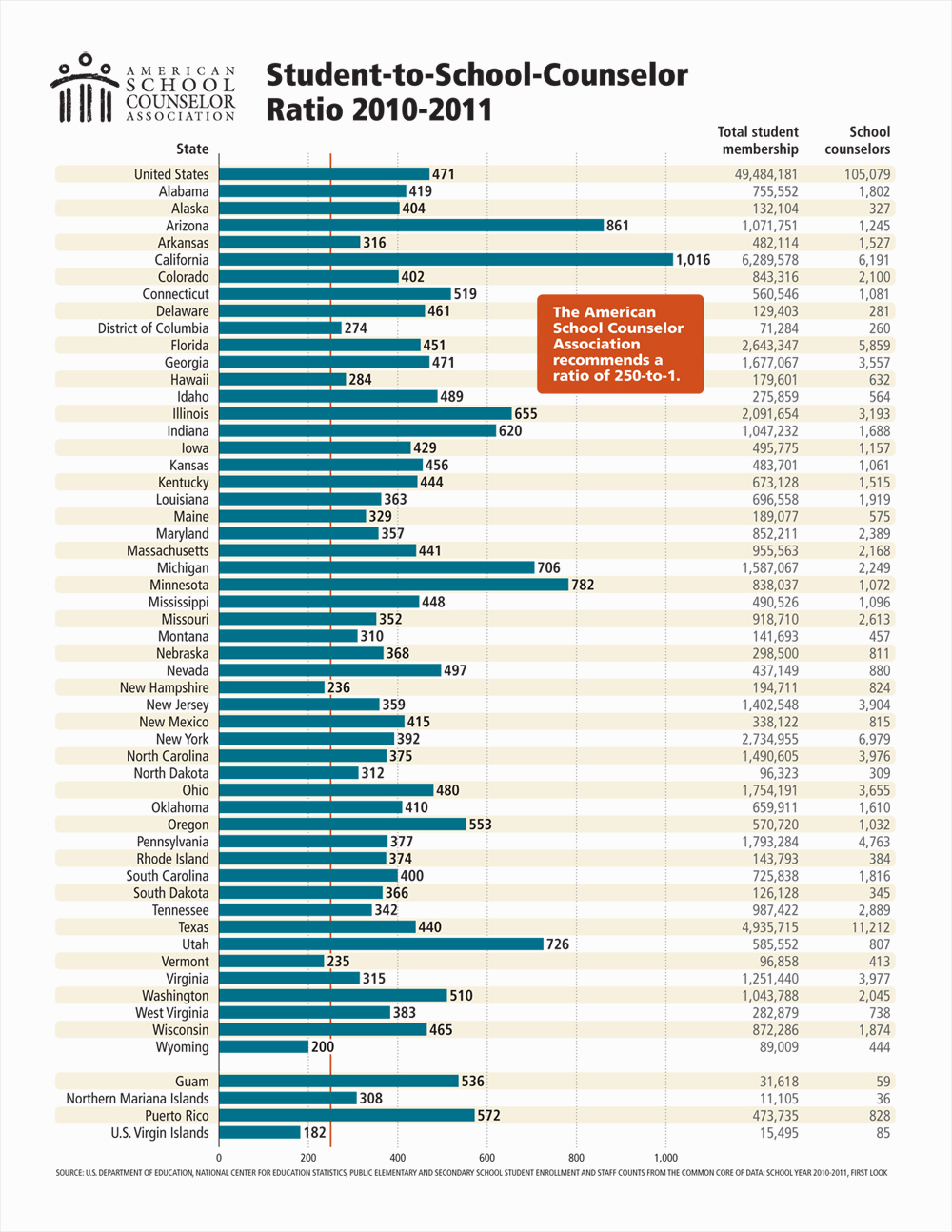 Loretta Whitson, executive director of the California Association of School Counselors, hopes that California schools will soon be able to provide more counselors where they are needed. Under a new funding law, more money will go to schools serving low-income students, foster children and students learning English. But districts can use this money as they see fit, and they may choose not to use it for guidance counselors.

Even the 17 states with laws assigning specific student-to-counselor ratios cannot, without consistent funds, enforce the numbers, which range from 300 to 1 to 800 to 1, according to Amanda Fitzgerald, director of public policy at American School Counselor Association.

According to former Inglewood High School principal Debbie Tate, Hillcrest High Continuation School, where Salas took the unnecessary credits, needed an overhaul. “It was essentially a dumping ground where schools sent their behavior problems,” she says.

Tate has since taken over Hillcrest, now called Inglewood Continuation School. Under Tate’s direction, the school has earned state accreditation, which means its courses now are aligned with college requirements. She acknowledges that transcripts get lost and that there isn’t enough support staff to track them down. That’s why she doesn’t leave anything to chance. She personally reviews each of her students’ transcripts.

Tawnya Perry, director of the Diploma Project, a dropout-prevention program operating in 12 schools in Los Angeles Unified School District that provides assistance to overburdened counselors, knows the scenario of the missing transcript all too well.

Perry recalls a Dorsey High School student who showed up to a graduation rehearsal thinking he’d be the first in his family to hold a high school diploma. Instead, he discovered that transcripts from schools he had previously attended were missing and that he wouldn’t receive a diploma. He fell into a depression and didn’t return to school.

Perry says the student had been moving around with his mother, who couldn’t keep up with rent payments. Records were lost along the way. A Diploma Project re-entry counselor had to call up all the previous high schools he attended to retrieve his records. Turns out, he only needed to take a couple of classes.

The student took the classes over the summer and graduated. “Without someone intervening, he would have dropped out,” says Perry. “There’s a lot of room for error. Guidance counselors are swamped; it’s not guaranteed they will always get it right. It’s easy for kids to get lost in this system.

Related: Dropouts try to find their way back to school

Come Back Kids, a charter school that helps dropouts in Riverside County, plays a similar transcript-repair and tracking-down role, often taking students from surrounding high schools and steering them to a cap and gown. The program’s counselors and teachers keep close track of student transcripts. If the school doesn’t receive a transcript, a staff member contacts the school. If the school doesn’t respond, the staff member files a complaint with the district.

Come Back Kids teacher Carmen Quinonez says a lot of students are just going through the motions, with no idea how many credits they have. Come senior year they’re surprised if they’re not graduating. It’s likely they never met with a counselor.

“There’s not enough time in a day for guidance counselors to talk one-on-one with kids and involve them in looking at their options,” she says. “These students need constant monitoring. They need to know where they stand every step of the way.”

Come Back Kids teachers evaluate transcripts against the program’s requirements and create action plans, which they monitor with the students every week. A student who has passed algebra twice can have the second course counted as an elective.

Still, the wasted time annoys Debra Sacks, the school’s director. “It drives me crazy,” she says. “If you ask a teacher or a counselor why this happens, they’ll often say ‘we didn’t have a transcript.’ That’s no excuse. We’re supposed to get transcripts within two days. You have people just assigning classes without truly evaluating the needs of the students and that’s just negligent.”

“We are simply overworked,” says Kim Scott, a guidance counselor for Riverside County’s alternative education program. She is responsible for students at three different schools, plus administrative duties. Her job is even more demanding because the kids she works with often need more than just advice on which classes to take. They need someone who will take the time to find out what’s going on in their lives, why they’re failing classes or not showing up to school.

“The most difficult kids become jelly in your hands when you give them individual attention,” she says. “They’re the sweetest little babies. I just wish I had more time to devote to each of them.”

Quincey Bennett, 18, who says he was bullied at various schools and kicked out of one high school for fighting, thrived with the one-on-one attention from teachers like Quinonez at Come Back Kids. “If you have a problem, the teachers are open,” Bennett says. “You can go and talk to them anytime. At my other high schools I wasn’t the star the way I am here.”

Bennett had attended three different high schools. He came to Come Back Kids in October of his senior year to make sure that by spring, he would have everything he needed to graduate. Quinonez discovered that at Riverside County High School, Bennett’s most recent, he’d taken an unneeded Life Science class and was enrolled in an art class for a credit he had already fulfilled.

In May of this year, Bennett graduated on schedule. He hopes to start college for fashion design in the next school year.

As for Salas, he says he’s put the past behind him. He can’t change the fact that he wasted years of his life. He’s just happy now to have a diploma. He has recently started a new job working with YouthBuild graduates, where he is building an alumni network to track graduates, help them apply to college, or even to get a job. Salas is taking one college course now, but plans to enroll full-time in fall 2015.

“Seeing everything that YouthBuild did for us and how they helped me to change my life, I’m a much better person,” he says. “I want to be that change in someone’s life. This is what I want to do with the rest of my life.”

This story was written by The Hechinger Report, a nonprofit, independent news website focused on inequality and innovation in education. Find out about more efforts to improve California schools.