In sixth grade, I went on a field trip to jail. Picture us: a bunch of Latino and African American kids sitting in a prison cell. I’ve never been able to shake the memory.

Here I was, an 11-year-old Latina from Jersey City, and our teachers were telling us, dead straight: This could be your future. I certainly got the message. What haunts me is how easily everyone could picture us behind bars. We could picture it, too.

When it came time for high school, my dad made the decision to move us to the wealthier, whiter community of Bayonne, New Jersey. It was safer, he thought, and gave me better odds in this world.  In my new school, I worried about how I dressed, or that maybe I was too “ghetto” for the people who had more money. I didn’t talk to anyone. Then I took a class with Gene Woods, following the Facing History and Ourselves curriculum.

Why do people threaten black and Latino kids with prison and isolation from their peers? Although data show these students are much more likely than their white counterparts to do hard time, desperate measures like threats and punishment are not the way forward. Education is. Teaching students about their heritage, and about other groups’ heritage, allows students to break free of stereotypes and appreciate their challenges and triumphs.

For instance, we learned in the Facing History curriculum about the Holocaust in which six million Jewish people were among those murdered. But we weren’t just talking about the horrifying death counts, or Hitler himself. Instead, we also discussed: Would we have had the courage to stand up to the Nazis?

Holocaust survivors Regina Resnick, Luba Wolski and Katie Berces came to our class to share their stories. I’ll never forget seeing the number tattooed on Wolski’s arm in the concentration camp. It was embedded in the skin. The sight made my heart pound, and I had goosebumps all over my body.

I’ve felt my whole life that the world has tried to brand an identity onto me. I grew up believing that, because I was female, because I was Latina, my voice was never meant to be heard. The courage of these survivors made me realize that not using your voice is a choice, no matter what you’ve been through, and it’s usually the wrong one.

After I learned about the Holocaust, my mother told me about the Trujillo Massacre in the Dominican Republic in 1937, which first brought our ancestors to the United States. Dark-skinned people were killed, she said, and the women were raped. The only option was to flee. I learned then that racially motivated hate was also a part of my family’s story.

Now, the things my school was teaching me started to mean something very different. The history we were learning about was my history, too.

But I also learned about fighting back. During the massacre, my aunt Felicia was determined to keep people safe. She brought both her family and complete strangers with her to America. She was an “upstander” — someone who used his or her voice to stand up for others.

Now, the things my school was teaching me started to mean something very different. The history we were learning about was my history, too. The history of genocide is the history of the Chinese Cultural Revolution, of the genocide in Darfur, of so many other crimes against humanity. This knowledge inspired and motivated me as I finished high school.

Related: This program is helping fast-diversifying suburban schools promote success for all students

I went on to attend Kean University, becoming the first female student body president in the school’s history. I helped manage a $500,000 budget and represented 60,000 voices. Today, I’m in my first year at John Jay College of Criminal Justice pursuing a master’s degree in public administration along with a law degree. My goal is to work with the FBI’s civil rights unit to stop hate crimes.

Reflecting back on that sixth-grade field trip, I see that I am more than the jail cell or brand that others sought to categorize me as. Becoming an upstander has allowed me to break free from those confines and define myself.

It is this kind of education that shaped me into the strong, proud woman and professional I am becoming.

This story about race and equity was produced by The Hechinger Report, a nonprofit, independent news organization focused on inequality and innovation in education. Sign up for our newsletter.

Emily Cubilete is a Facing History and Ourselves alumna and 2018 Upstander Award winner. A 2017 graduate of Kean University, Cubilete is involved in her community, visiting children’s hospitals and the elderly. She now works as a case manager at a drug detox center in New Jersey while completing her MPA/JD at John Jay College. 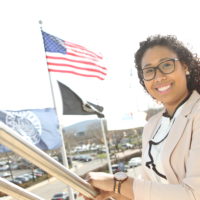 Emily Cubilete is a Facing History and Ourselves alumna and 2018 Upstander Award winner. A 2017 graduate of Kean University, Emily is involved in her… See Archive