This story also appeared in WWNO

NEW ORLEANS – Many of my favorite moments in ‘The Whole Gritty City,’ a new documentary about the power of school marching bands in New Orleans, feature everyday glimpses of the city’s kids just being, well, kids: There’s the look of embarrassment and pride on an 11-year-old trumpeter’s face when his family calls out to him from the sidelines of a parade route; there’s the utter goofiness of a pint sized 13-year-old musician’s candor in showing us the neat precision of her daily teeth brushing ritual; and there’s the mixture of shock, curiosity, and glee with which middle school age band members observe the silhouette of a naked woman dancing behind a screen, at the start of the all-female Muses parade.

Listen to an audio recording of this essay:

It’s a testament to the skill of filmmakers Richard Barber and Andre Lambertson — but even more so to the poignant soulfulness of the children featured — that the kids outperform even the famously charismatic adult band directors. The film very loosely follows the bands at the now-obsolete Rabouin and O. Perry Walker high schools, as well as the Roots of Music program, which brings together children between the ages of nine and 14 from across New Orleans. 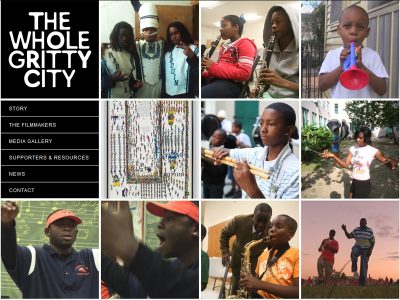 Throughout ‘The Whole Gritty City’ the young musicians are afforded wide berth and ample screen time to share their thoughts on everything from the porch steps where they feel most comfortable hanging out to the guns that infest some of the blocks they must traverse every day. Even the title of the documentary was inspired by one of the student’s soliloquies: 18-year-old Skully’s declaration, as the camera zeroes in close on his face, that he needs to give a shout out not only to his momma and friends Peanut, Johnny, Killer Chris, and Busy Bee, but to “the whole gritty city. You hear me? The whole gritty city.”

Gritty is an apt word to describe not only New Orleans, but each and every one of these kids. There’s a brief segment in the film, when a group of students parades through a deep, New Orleans-size pothole of a puddle without breaking formation. The moment speaks to the children’s tenacity not just in marching band, but in life. Some days, they get speckled with all the salt the earth can possibly throw their way, yet somehow keep their stride.

Watching the documentary, I kept contrasting it with Blackboard Wars, the Oprah Winfrey Network’s 2013 reality television series about the takeover of a New Orleans high school by a new charter school operator. Blackboard Wars also prominently featured New Orleans schoolchildren and their challenges (including teen pregnancy, mental health issues, gun violence, and school fights). But in Blackboard Wars there were few, if any of the intimate everyday moments that captivated me in ‘The Whole Gritty City.’ Instead, the series defined the children by the worst of their problems and, as a result, pathologized a community. By neglecting to portray the students as multi-dimensional — with all the quirks, dreams, and flaws typical of teenagers — it was also untrue.

‘The Whole Gritty City’ is hardly devoid of tragedy. The documentary concludes with the murder of Brandon Franklin, a recent graduate of O. Perry Walker, who served as the school’s beloved assistant band director. In the film’s emotional finale, hundreds of teenage musicians gather together on a sweltering morning to perform a final tribute at Franklin’s funeral. The students pour their heartbreak into the music — some with dramatic fury, others with quiet pain. A minister implores the crowd, “Don’t ever think it’s OK to bury your children.”

Don’t ever think it’s OK to bury your children.

The minister’s declaration, the heartbroken mourners, The Whole Gritty City: They hold power, precisely because, by that final scene, the film has so clearly established that we are watching ordinary children. Ordinary children pouring their hearts into music, and trying to find their way forward, in the wake of extraordinary pain.

Sarah Carr is a contributing editor who also oversees the Teacher Project at Columbia Graduate School of Journalism. She has reported on battles over school… See Archive