Earlier this month, sports and culture news site The Undefeated published a story about NASA mathematician Clyde Foster. His calculations and computations helped launch rockets into orbit during the Space Race between Cold War rivals the United States and the Soviet Union during the ’50s, ’60s and early ’70s. For over three decades, Foster worked for NASA at the Marshall Space Flight center in Huntsville, Alabama. In that role, he actively recruited hundreds of black students into the space program. In addition, Foster helped found the computer science program at what is now Alabama A&M University.

His “quiet and relentless advocacy brought hundreds of African Americans into space industry jobs in the Deep South, helping to shift perceptions of black people in ways both subtle and profound,” wrote Michael Fletcher in the story.

Foster’s intelligence and dedication put people into space during one of the most tumultuous times in our nation’s history. He created hundreds of desirable jobs in science, technology, engineering and math (STEM) for black Alabamians. Foster’s legacy of leveraging black talent in the STEM fields cannot be overstated. Industries desire the skills associated with STEM degrees because they are needed to design, produce and extract the materials, goods and services that make up the “traded sector” of the economy, which comprises everything that can be traded outside of the region (from raw materials and algorithms, to cars and software) versus skills in the non-traded sector that are related to industries that serve local residents (such as schools, construction, healthcare).

If the number of black-owned firms in Birmingham was proportionate to the percentage of college-educated residents who are black, 830 more businesses in the city would be black-owned.

Yet more than 60 years after Foster started at NASA, racial disparities in employment and in ownership of businesses in STEM-related fields persist. According to my review of the Census’ Annual Survey of Entrepreneurs, there are more than 4,000 trade sector firms in Alabama’s Birmingham metro area, including businesses that tackle manufacturing, information, finance and insurance, and professional, scientific, and technical services, yet only 3 percent — a measly 135 — are black-owned. If we assume black STEM graduates have the skills required to start a business (although more than half of all independent business owners in the U.S. lack even a four-year degree), we should look to them to fill the gap. If the number of black-owned firms in Birmingham was proportionate to the percentage of college-educated residents who are black, 830 more businesses in the city would be black-owned.

Related: Charter schools aren’t a radical solution and neither is blaming them

New strategies are needed to counter the racial disparities in business ownership, especially in the traded sectors, where black people are already primed to take on new roles. By ignoring this pool of talent, we are making Birmingham and the country as a whole less competitive and productive. We can start to mend the racial imbalance by investing in an overlooked source of emerging black talent: historically black colleges and universities (HBCUs). Alabama is home to 14 HBCUs — more than any other state — and nearly a third of their graduating students are ready to contribute to the growing trade sector of the economy. In the 2016-17 academic year, STEM and business-related fields comprised 31 percent of degrees at Alabama’s HBCUs, according to my analysis of data from the national dataset, the Integrated Postsecondary Education Data System.

Across the country, the share of STEM jobs has expanded significantly, with STEM employment increasing from 9.7 million to 17.3 million from 1990 to 2018 (a 79 percent increase). Data suggests that this trend will continue, particularly in comparison to non-STEM positions. STEM jobs will grow 13 percent from 2017 to 2027, as opposed to 9 percent for non-STEM work. HBCUs are well situated to meet the demands of a STEM economy.

There’s no scarcity of black talent available in Birmingham; what’s lacking in this city, and in Alabama, are people with a mindset like Clyde Foster’s, who are prepared to force open the doors of opportunity for black graduates. While more black students should be encouraged to look to the STEM field and its abundant employment opportunities, we must also support those who seek to start their own ventures.

Within its HBCU student bodies and the communities surrounding these colleges, Alabama already has the infrastructure in place to promote entrepreneurship. Institutions in close proximity to Birmingham, such as Miles College and Stillman College, offer minors in entrepreneurship, while Alabama A&M runs the AAMU Center for Entrepreneurship, Innovation, and Economic Development. The initiative works with businesses, investors, and other stakeholders to promote economic growth in the North Huntsville area, particularly in underrepresented communities.

Alabama is home to 14 HBCUs — more than any other state — and nearly a third of their graduating students are ready to contribute to this growing sector of the economy.

HBCU talent can meet workforce demands if government and the private sector invest in programs that develop start-up businesses on campus.

As our society speeds toward the usage of transformative technologies such as artificial intelligence, machine learning, quantum computing, augmented reality, virtual reality and blockchain, investing in black tech startup ventures that can quickly grow in size and profitability will help promote a more inclusive economy, create multi-generational wealth among black families and validate the overlooked and devalued production of STEM graduates at HBCUs. The continued success of HBCUs is contingent upon our investments in programs and ventures that promote a more inclusive economy.

For instance, Opportunity HUB (owned and operated by co-author Rodney Sampson), is an Atlanta-based multi-campus co-working space and enterprise incubator that has worked with HBCUs to support tech entrepreneurs. OHUB works with more than 4,000 student members and early professionals at 319 colleges and universities, including 100 HBCUs. Yet the majority of the HBCUs don’t offer courses that teach students how to be successful entrepreneurs, or programs that support student ventures such as startup accelerators and pitch competitions. Few initiatives help students commercialize their work.

While our country is no longer facing the urgent demands of the Cold War, remedying the racial disparities in business ownership is no less important. As Foster recruited and cultivated the talent of black students at NASA, we must also invest in STEM education in HBCUs, and in the idea of using knowledge to create our own tech businesses, in Birmingham and beyond.

This story on STEM fields was produced by The Hechinger Report, a nonprofit, independent news organization focused on inequality and innovation in education. Sign up for Hechinger’s newsletter. 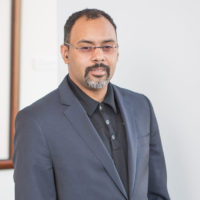 Rodney Sampson is the Executive Chairman and CEO of Opportunity Hub and a member of Omega Psi Phi. See Archive