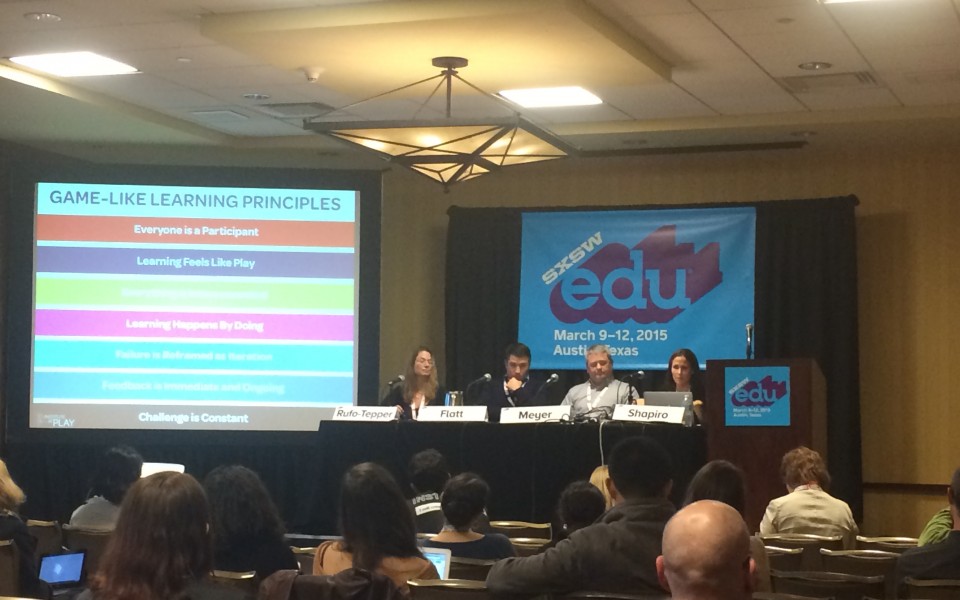 Could a self-driving bus be the classroom of the future? Non-traditional school models from SXSWedu

A school with coding in every class

Last year, Beaver Country Day School, an independent school in Chestnut Hill, Massachusetts, introduced coding in a geometry class. By the end of the year, all teachers in grades 6-12 were integrating coding into classes. That means students in English were writing code to create animation for a scene from Macbeth, while students in History were using coding to visualize data about colonial America. The goal, teachers said, is to allow students to show their learning and knowledge in different ways. It is also a way to increase engagement, said teacher Rob MacDonald. Instead of reading information from a textbook in a “mundane way” in math classes, “my kids were more engaged and took ownership of the material and also showed me later on that they had a good memory of it.” MacDonald said. To roll out the new initiative, teachers relied on each other to learn how to code, and to learn how to teach coding. They also had to move beyond the idea that they would lose time to teach content by allowing kids to code. “When you’re teaching coding you’re not sacrificing content,” MacDonald said. “You’re just tackling it from a different perspective.”

In 2009, a group of educators in New York City launched Quest to Learn, a public secondary school that revolves around games and game design. The school, which now serves 650 middle and high school students, aims to make technology meaningful and purposeful. W. Max Meyer, a researcher from New York University who spoke on the school’s panel here, says “it’s no longer ‘teacher as presenter of content,’ it’s ‘teacher as designer of learning spaces.’ ” Each year, students create and play with various technologies, but are also introduced to educational content in a challenge-like format. (The school’s nonprofit partner, the New York City-based Institute of Play, gives this example on its website: During one semester in science and math, “sixth graders help a shrunken mad scientist, lost inside the human body, navigate the systems he encounters and report back to his research lab.”) During the SXSWedu session, the Institute of Play’s Ross Flatt said, “Learning happens by doing. Learning feels like play. Everything is interconnected. Everyone is a participant.”

The Stanford Online High School opened in 2006, before the era of MOOC’s, 1-to-1 laptop initiatives and blended learning. At the time, the founder, Raymond Ravaglia said that the goal was to “create the best secondary school in the world.” Classes at Stanford Online High School meet twice a week online, using a Socratic seminar style, which Ravaglia said is meant to mimic a small liberal arts college vibe. Before class, students watch lectures online and also complete traditional assignments like math problem sets and essays, and read books and textbooks. (That’s the flipped classroom model.) Most students who attend the school either have been home-schooled previously, live in remote rural areas or travel abroad with parents and are looking for stability, said Ravaglia, who has since left Stanford and works in education consulting.

Related: Lessons from Abroad from Austin: International discussions at SXSWEdu

School of the future? A mobile classroom for at-risk students

In the future, will at-risk students be able to order a self-driving bus as they would a pizza? Kevin Bauman, senior director of product management at an online, distance-learning high school called Penn Foster High School, said in a Tuesday session that it’s not beyond the realm of possibility. Not only will students be able to order a self-driving bus, he said, but the bus will have technology and learning materials on board, as well as a tutor. “It’s just a question of reorganizing what already exists into different formats,” Bauman said. The mobile classroom fits into today’s “on-demand society and sharing economy,” Bauman said, and could also incorporate blended learning, the combination in-person and technology-based education. The idea is to fit learning into the schedule of an at-risk student who may be raising children or may need to work but also wants to earn a high school diploma or finish credits. The ideal place for this idea to launch? “Detroit,” Bauman said. With its low high school graduation rate of 65 percent and a history of automotive expertise, Bauman said, “it’s a very, very ripe city for this kind of an innovation.”