Both the math and English Common Core standards have their share of critics but it’s math that gets special condemnation, as the new problem worksheets land on kitchen tables across the country.

Parents are taking to the Internet to air their frustrations by posting puzzling problems from the new standards. And even writers of the Common Core – a set of standards in math and English adopted by over 40 states – have agreed some of the questions were a bit bizarre and say teachers should also send home traditional problems. 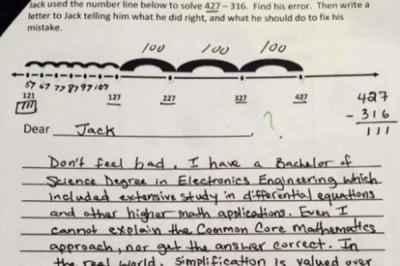 So the question on the minds of many of the educators who gathered for the 25th annual conference of the Association of Mathematics Teachers of New Jersey was, what does a good common core question look like? The answer, according to many presenters, is to pose them with enough ambiguity to require students to think creatively to problem solve.

“Students should grapple with language,” said David Wees, who designs Common Core aligned math questions at New Visions for Public Schools. “You have to choose the right level of ambiguity, enough language so that students know what to do without making it obvious what they need to do.”

RELATED: Why is this Common Core math problem so hard? Supporters respond to quiz that went viral

Jamie Wall, lead math teacher at Brooklawn Middle School in Parsippany, New Jersey, spent the summer revising her school’s math curriculum in anticipation of the state’s new end-of-year exams. Starting this year, New Jersey will be using tests developed by PARCC, a consortium of about a dozen states that are developing tests to align with Common Core.

A sign of a good math problem, according to Wall, is that kids are able to approach it in many different ways. “Going over all the ways might be boring for an advanced student, but the less advance students need to be exposed to all the ways to do something,” she said.

Wall suggested ways to get kids to think about math that includd drawing pictures and crafting narratives. “Write me a math story,” she said.

Many of the presenters at the New Brunswick conference focused on the eight math practices outlined in the Common Core standards. They were particularly interested in two – making students persevere through difficult questions and having them construct and critique math arguments.

Linda Gojak, president of the National Council of Teachers of Mathematics, presented several problems she liked. One set she called, “always, sometimes or never.” The question asked if multiples of five have a five in the ones’ places always, sometimes or never and asked students to justify their answers. The answer is sometimes, as multiples of five always either have a zero or a five in the ones’ place.

As one the authors of the Common Core math standards, Phil Daro showed a problem he liked. He said, have students solve 15 divided by three in six ways: as a multiplication problem, by constructing equal groups of numbers, using an array, using an area model, using the multiplication table, and through writing a word problem. Students could learn about remainders by having them do the same thing for 16 divided by three, he suggested.

Linda Furey, National Educational Consultant at Triumph Learning, likes a problem that has students pick between four possible field trips to see caves. The students are given the costs of tours, lunch, and admission fees for each trip and given a budget of $700. All but one of the four options comes in under budget. Students’ judgment then comes in when the activity asks the students to make an argument for which trip the class should go on.

Jason Zimba, a founding partner of Student Achievement Partners and a member of the Common Core math standards writing team, doesn’t think teachers should throw out age-old math problems like seven plus eight. The standards, for example, still require that students memorize their times tables by third grade.

“If I were managing it in my own classroom,” says Zimba. “I would be sending home fairly traditional-looking problems, not only because that’s what parents are going to be able to work with, but because that’s part of the standards. They’re the end point. That’s the goal.”

This story was produced by The Hechinger Report, a nonprofit, independent news website focused on inequality and innovation in education. Read more about our Common Core coverage.

Emmanuel Felton is a former staff writer. Prior to joining The Hechinger Report, he covered education, juvenile justice and child services for the New York… See Archive