The country just got more politically involved — and polarized.

That’s a dynamic that has implications for the way students learn, live and work together.

It also leaves academics facing some tough questions about how they should teach under these increasingly turbulent conditions.

Here’s the good news: Americans turned out in record numbers for the 2018 midterm elections, perhaps at the highest rate in more than a century. Election results confirm a big bump in civic interest and participation among college and university students. The National Study of Learning, Voting, and Engagement (NSLVE) won’t have the final numbers for months, but the signs are clear. College-student voting rates will very likely be up from a low 18 percent in 2014. They could even exceed the national increases of 10 percentage points for youth (college and non-college) and 12 percentage points for all ages.

Related: How the Georgia governor’s race could influence college access there

It’s tough to put a specific number out because predicting voting rates is tricky. On the one hand, college-student voting rates should be high. Among the strongest predictors of voting in the United States are high levels of education, older age and gender, with women voting at higher rates than men. College students have higher levels of education, and simply being in college should foster knowledge about and interest in public affairs. Women also dominate in higher education, accounting for almost 60 percent of currently enrolled students nationwide.

On the other hand, because of their age (about 70 percent of students in our NSLVE database are aged 18-24), college students typically vote at lower rates. Young and first-time voters may be intimidated because they do not know how to vote. Convenience also matters. About half of the college students in our database attend college more than 25 miles from home, and distance to the polling location affects turnout. Many students also face suppressive voting laws, hostile poll workers, intimidation and other efforts aimed at deterring them from voting.

“Colleges and universities need to address head-on the reality that these growing divides will affect the campus climate for political learning and participation.”

So, demographically speaking, there are factors that could explain a rise in student turnout as well as those that could explain a potential drop. In this election season, however, there were issue-based reasons that may have played a bigger role than traditional predictors of turnout. Simply put, the election outcomes align with the make-up and attitudes of the majority of U.S college students today.

Diversity and inclusion won. Women increased their influence in Congress — at least 102 women will serve in the U.S. House (up from the previous record of 85, set in 2016). This includes a record number of 43 women of color. And of the 964 candidates in 2018, 272 were women; 216 were Black, Latino, Asian, Native American or multiracial; and 26 identified as lesbian, gay, bisexual or transgender.

Student populations in higher education, with the notable exception of highly selective institutions, are also increasingly racially and ethnically diverse. Around 60 percent of enrolled students are women, and 40 percent identify as Black, Latino, Asian, Native American or multiracial. College students also care deeply about inclusion; a majority say that they would choose diversity and inclusion over free speech. And in our research, we found that students have no tolerance for racist, sexist, xenophobic or homophobic speech.

Activism and direct democracy also won. Ballot initiatives passed in states around the country, including felon re-enfranchisement in Florida, protections maintained for transgender people in Massachusetts and a minimum-wage increase in Missouri.

Young people care about issues like gender, racial and income inequality, LGBT rights, the cost of higher education, immigration and DACA, health care, gun safety and the environment. Their activism around these and other issues made them more likely to vote.

Democrats also won. With some races still uncalled, Democrats won the popular vote for the House by 8.5 million votes. They picked up at least 40 seats in the House of Representatives and won seven governorships, including two in Republican strongholds. Democrats also flipped previously Republican-held state legislatures in four states and gained control over one chamber in six more. These state-level gains happened despite gerrymandered districts, which disproportionately advantage Republicans.

For colleges and universities, that means some professors may try to avoid conflict by dodging political issues for the sake of keeping peace in the classroom. Professors may stop using their academic freedom as it was intended to be used — to promote robust exchanges of ideas, to examine and dissect unpopular viewpoints.

Colleges and universities need to address head-on the reality that these growing divides will affect the campus climate for political learning and participation. Greater student interest in the political process and tangible gains in more equitable representation among elected officials are good starting points for advancing learning for democracy. And conflict always presents learning opportunities. But campuses also need to acknowledge and tackle undemocratic forces in some segments of American society that thrive on hate and exclusion. The next two years should be dedicated to teaching students to talk and learn with one another despite ideological differences, while simultaneously drawing difficult lines — or else the gaps will only continue to widen.

This story about higher education and student voting was produced by The Hechinger Report, a nonprofit, independent news organization focused on inequality and innovation in education. Sign up for the Hechinger newsletter.

Nancy Thomas directs the Institute for Democracy & Higher Education and the National Study of Learning, Voting, and Engagement at Tufts University’s Jonathan M. Tisch College of Civic Life and is a member of the Scholars Strategy Network. 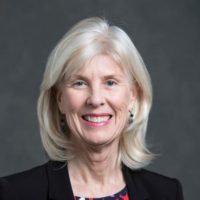