Two years after 9/11, when I was 6 years old, my family moved from Cairo to a predominantly white neighborhood in central New Jersey.

It was all too common for the kids in the area to make comments like, “Hey Engy, don’t blow up the building.”

I grew up being called a terrorist. People around the country were greatly impacted by 9/11, especially my neighbors who had felt this act of terror firsthand. On its anniversary, my fifth-grade class honored a moment of silence — one that was interrupted by a student asking me, “Why are you being silent? You probably don’t even care.”

Kids can be cruel, but what hurt most was the feeling of being excluded from the community. Why wasn’t I allowed to remember those who had been mercilessly murdered, the families who had lost their loved ones or the first responders who had sacrificed their lives?

What made me so different from the other kids?

It wasn’t until my first day of high school, in history, that a window of understanding was opened for me. The teacher used a curriculum from Facing History and Ourselves, an educational nonprofit that provides teachers with tools to engage their students in examining bigotry.

Mrs. Lott-Jones started the class with “First They Came,” a famous poem by Martin Niemöller. The narrator is the ultimate bystander — someone who is present for multiple acts of injustice and intolerance but who chooses not to speak up.

“Kids can be cruel, but what hurt most was the feeling of being excluded from the community.”

For me, this poem reinforced that we all have the choice to be perpetrators, bystanders or up-standers. As the narrator learned, if you’re not willing to stand up for others, how can you expect someone to stand up for you?

Facing History taught me that each of us has a decision to make and a role to play. I decided to stand up for myself and for others. It also helped me realize that I didn’t have to be ashamed of who I am.

I came to love learning about one of my classmates’ Jewish heritage and sharing my Muslim heritage with him. He raised questions for which I didn’t always have answers – which led me to do more of my own research, studying the politics involving Israel and Egypt, and asking my family questions.

Looking back now that I am a few years older, I realize that the class enabled me to have these empowering conversations, sparking meaningful, inclusive dialogue and motivating me and my classmates to want to effect change.

Young people need safe spaces to learn about history through different perspectives, explore how moments from the past influence the present and understand how our own identities take shape with our learning. It is through such experiences that young people can develop the agency to stand up for what they believe in.

Education has provided me the tools to stand up, speak out and stop hate. It is now my duty to pass those tools to others. That is how real change is created.

This story about immigrants and refugees was produced by The Hechinger Report, a nonprofit, independent news organization focused on inequality and innovation in education. Sign up for our newsletter.

Engy Gadelmawla is a Facing History and Ourselves alumna and member of its NextGeneration group. A 2018 graduate of Drew University, she now works as a legal and compliance analyst at a private equity firm in New York. 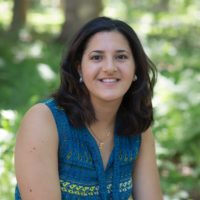 Engy Gadelmawla is a Facing History and Ourselves alumna and member of its NextGeneration group. A 2018 graduate of Drew University, she now works as… See Archive