As countless people across the country voice their opinions on social media, in the news and around dinner tables, I cannot help but wonder what the proper response is and whether a proper response should vary depending on an individual’s racial identity.

I wade into this pool of thought knowing that the organization I founded, Matchbook Learning, serves a student population in Detroit and Newark that’s nearly 100 percent African American. The majority of our staff are also people of color, and we engage with stakeholders of all races and ethnic backgrounds on an almost daily basis.

I want to offer my own humble opinion, not as an expert, but as a person of color (Indian descent), an immigrant to this country and someone who is combatting the effects of poverty, racism and systemic injustice in the lives of the students and families I serve.

In the aftermath of tragedies like the ones we’ve seen in Baton Rouge, Dallas and Kansas City, there are three successive responses we need to lead us from suffering to redemption, and they are lamentation, empathy and restoration.

We often think of lamentation as what occurs at a funeral, so we often believe we have no other place or excuse for it in today’s society. However, we see in ancient cultures that lamentation was a specific oral utterance often used by poets, lyricists and musicians as a means to creatively give expression to the depth of their sorrow or distress over injustice.

It is the last point, distress over injustice, where we see the African American community lamenting in the forms of marches, civil protests and, in some cases, uncivil protests and destruction of property or people.  Whether legally or illegally, what we are seeing across the nation is lamentation in action, and we should not dismiss it.

There are some of us who do not feel the depth of pain, sorrow or injustice that members of the afflicted community feel. We cannot lament because our experiences with the police, justice system and law are not unjust. However, instead of dismissing, refuting or ignoring legitimate expressions of lamentation, we should respond with empathy.

Empathy can take many forms, but artists express their lamentation in order to invite others to hear, listen and join them. To listen to their lamentation is to empathize. I liken it to attending the funeral of a close friend’s relative. You may not have known the relative who died personally, but because you love and care for your friend, you put your day on hold to attend the funeral and share in their sorrow.

Empathy towards one who is lamenting is a sign of unity, friendship and love. Imagine how painful it would be if your best friend did not attend the funeral of your child.  What if they were silent or indifferent? Silence from a friend can feel worse than the opposition of an enemy.

But what if we don’t agree that a particular act was unjust? What if we cannot lament because we do not see the injustice? Would empathy legitimize what I might perceive as an illegitimate response? I have heard these sentiments expressed in some shape or form. I think people can feel trapped because they view such empathy as a pathway to entitlement, or even an abuse of power, and fear what unintended consequences may be unleashed from it.

That’s why empathy shouldn’t be the end in itself. Nothing will change unless our response includes restoration. Too many rants on social media only capture our lamentation. Some capture lamentation and empathy but then stop there. Restoration seeks to put things in their rightful place. It goes beyond a single incident, but to the underlying root causes of systemic injustice. Restoration starts in the way we build the academic and moral character of our children at home and in school.

When I discipline my children, they sometimes lament at the punishment. I don’t usually see or experience their lamentation as they do. However, I try in both tone and gesture to understand what they are feeling and experiencing. I attempt to empathize and convey my own sadness in their suffering even though I contributed to it.

In the end, I offer them an embrace and ask “do you know that I love you?” Only then do we move forward together, and they are restored.  I may not have solved the habitual problem that led to their punishment, but we are closer in understanding and love as a result supporting my child’s need to lament and my effort to empathize with the goal of restoration for us both.

It may seem obvious in parenting, but we often forget in these race discussions that those lamenting are usually not the ones we should expect to initiate restoration. But those seeking restoration must first empathize with the lamenters or their attempts at restoration will not be well received.

I believe that when we empathetically approach another person who is lamenting, and affirm that their pain and injustice is in some way also our pain and our injustice, we begin to heal and restore them.

Sajan George is the CEO and president of Matchbook Learning, the non-profit that operates Merit Preparatory Charter School in Newark, N.J. and Michigan Technical Academy in Detroit. 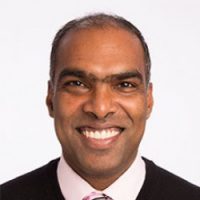