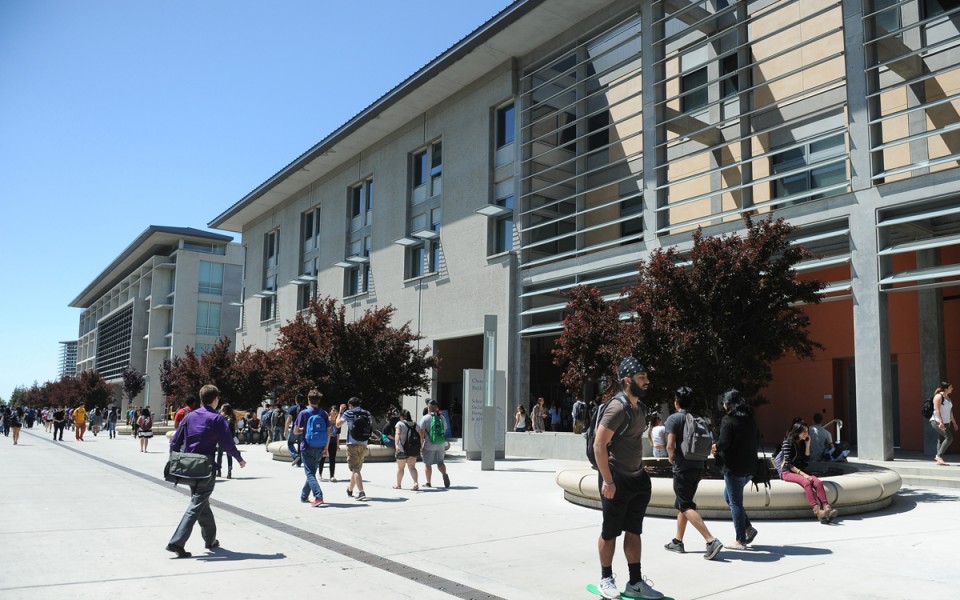 In a lesson for other states, a new campus stretches budgets and falls short of goals

This story also appeared in The Associated Press

MERCED, Calif. — A decade has passed since America’s newest research university opened amid farmland here. And surprisingly little on the landscape has changed.

Cows still graze alongside the University of California at Merced. There’s still no student union; most dining needs are served by lunch carts and food trucks. Some researchers are based miles away at a former Air Force base.

Pushed by politicians who represented the San Joaquin Valley in California’s farm-dominated heartland, the university was the most ambitious of several new public campuses that have opened in states including Florida and Arizona only to face deep cuts in higher-education budgets.

For UC Merced, dramatically rising construction costs collided with massive reductions in state higher education spending following the 2008 economic downturn. The university probably could not have been built at a worse time, and it stretched available resources even more thinly.

Merced enrolled just 6,268 graduate and undergraduate students this past school year – the lowest number in the UC system – as budget problems slowed construction and pinched the school’s capacity to enroll more students. By 2020, the university anticipates enrolling about 10,000 students, a target scaled down from earlier projections.

But the thin enrollment numbers are not just a product of construction delays. While it was an important win for local politicians, the school has struggled to promote itself to students. In 2010, fewer than 7 percent of admitted Merced freshmen and transfer students actually showed up, compared to 46 percent for the UC system overall, according to the university. Of those rebuffed that year by other UC campuses, fewer than 2 percent accepted an offer to come to Merced. The numbers have slowly grown; this year, 14 percent of admitted freshman applicants and 10 percent of admitted transfer students enrolled.

And the university hasn’t yet spun off the promised economic revitalization in an area hit hard by recession and drought.

Merced’s experience should be a warning, said Henry Eyring, co-author of The Innovative University: Changing the DNA of Higher Education from the Inside Out. As much as politicians like to cut ribbons in front of new campuses, he said, traditional colleges have become much more expensive than online courses and other new means of delivering education.

The time may be past for adding conventional universities, Eyring said.

“You have to ask, ‘Is this truly essential?’” he said. “You have to look very closely at every dollar invested into brick and mortar.”

Campus leaders, however, say UC Merced is doing exactly what it was meant to do: bring higher education to a region that doesn’t have enough of it.

Only 13.5 percent of Merced County residents 25 or older have at least a bachelor’s degree, according to the Census Bureau, far lower than the state’s 30.7 percent. The eight-county, nearly 300-mile-long San Joaquin Valley, where Merced is located, has millions of acres of farmland worked primarily by immigrants.

Related: Once invisible, college boards of trustees are suddenly in the spotlight

But only about a third of UC Merced’s 5,900 or so undergraduates are from the San Joaquin Valley.

“These students by and large are grateful for the opportunity to be here,” said Dorothy Leland, who became the university’s third chancellor in 2011. “They weren’t The school has built itself on a nontraditional model that eschews academic departments in favor of interdisciplinary units where, for example, engineering and health researchers collaborate. Research programs include climate science, energy and health, and U.S. News & World Report this year for the first time included two UC Merced graduate programs – engineering and psychology – in its rankings.

The University of California began planning its 10th campus in 1988. After lobbying from politicians, regents chose Merced, an isolated city of 81,000 between Fresno and Modesto near the Sierra Nevada foothills, in 1995.

Burned by failed plans in the past, Merced now is vague about any new expansion goals. The university’s blueprint for developing 219 additional acres calls for new “multidisciplinary” classrooms and laboratories that can be used for a variety of academic subjects, as well as 2,000 student beds. But it’s likely that new dorms, classrooms and research facilities are years ─ and many millions of dollars ─ away from even being started.

Related: As a whole new kind of college emerges, critics fret over standards

Kelli Eggleston, a 22-year-old cognitive science senior from Monrovia, California, just east of Pasadena, said she was one of the many students initially reluctant to accept Merced’s invitation after she was turned down by other UC campuses. Impressed by the small size and “pioneering spirit” of the school during a campus visit, though, she decided to come here instead of San Diego State University.

“Even though I liked SDSU, it had 35,000 students,” said Eggleston. “It worked out for me. Who would’ve thought I’d come from L.A. and rather be in Merced than go back?”

Other students, even those who grew up nearby, said they barely knew anything about the campus in high school. Lourdes Diaz, a 19-year-old sophomore from Bakersfield, said she didn’t realize the school was new before arriving as a freshman.

And Portia Mira, a 26-year-old doctoral student studying antibiotic resistance, said she only vaguely knew the campus was being built while growing up in Merced.

“I love it,” said Mira, who got her bachelor’s degree at Merced. “I love the small campus here. I have so many opportunities here I wouldn’t have had at a larger school.”

Related: Poorest states cut what experts say could help the most: higher ed

Although thousands of students and employees now live on campus and in the surrounding communities, the city of Merced has not changed much since the college opened in 2005. The sleepy downtown has little in the way of entertainment for students. Some restaurants sit empty during lunchtime.

With an eye on revitalizing the town, the university plans a new downtown center for administrative needs and to streamline patents resulting from UC Merced research, Leland said. The center will have 900 employees and is scheduled to open in 2017.

Some have called on UC Merced to do more for the 450-mile-long Central Valley, a larger geographic area with 6.5 million residents that includes the San Joaquin Valley. But it’s still trying just to come up with the money to finish its campus, hoping to construct more classrooms, student housing and research facilities in the next five years.

“We’re crammed for space,” Leland said, glancing out her office window at the school’s final state-funded construction project, a classroom building. “There goes my view of Yosemite.”

The recession and resulting funding cuts were a disaster for the new university, she said. UC officials are working on innovative ways to build the rest of the campus, including partnerships through which developers would shoulder more of the financial risk, but the timeline for expansion is still a guess rather than a definite plan.

No other new UC or California State University campuses are in the works.

High school students in the Central Valley still have little awareness of the school’s existence, said Benjamin Duran, former president of Merced College, a community college. UC Merced should focus on teaching, but is trying to reach the more prestigious heights of research universities, said Duran, who now leads the Great Valley Center, which promotes economic, educational and social growth.

The campus is working with other Central Valley institutions to reverse perceptions that a UC education is for people other than the region’s low-income, largely Latino population. California State University Fresno marketing students, for example, are working on an awareness campaign to get more Central Valley students to apply to Merced and other colleges in the region, Leland said.

The university has appealed for time. A decade is far too little time to judge the campus, said Janet Napolitano, president of the UC system.

“UC Irvine 50 years ago was a pile of dirt,” she said. “Now it’s a center of bioengineering and other disciplines in Orange County. There’s a whole cluster or companies around there.”

Editor’s note: This story has been revised to clarify that the official enrollment goal at UC-Merced for 2020, which has been adjusted downward since the start of the economic downturn, is 10,000 students.

Matt Krupnick is a freelance reporter and editor who contributes regularly to The New York Times and the Hechinger Report. He was a reporter with… See Archive