How would you describe your school?

It’s unique in the sense that it’s not particularly nice. I think it’s sort of known locally to be the not-as-nice, poorer school. I’m almost certain nobody loves it there. I don’t excel in school at all. It’s one of those things I have to do. I don’t particularly enjoy school, but I don’t think that’s unnatural. I think that’s just how school is. It’s not fun. Some days are better depending on what classes I have that day, but mainly, I’d rather just stay at home.

How would you describe the students at your school?

As far as racial diversity, pretty much everyone in Vermont is white. That’s just the way it is. Pretty sure Vermont is like the whitest state in the country. I don’t think it’s ’cause people here are racist. I feel like people from Vermont are some of the more welcoming people. Like, there’s Burlington fighting to become a sanctuary city, despite Trump not really wanting that at all. As far as economic diversity, I feel like for the most part people that go to Mount Abe aren’t that rich. There’s definitely wealthy people that go there, but I feel like, for the most part, it’s middle class, lower class.

As far as welcoming, it’s mixed, for sure. There are the rednecks, jocks, and nerds. That’s probably the three main groups. Then there’s, like, jocks that are friends with nerds. That does sound sort of cliché. I’d say I’m more of a nerd, if anything. I’m less social than a jock, for sure. I’m not a redneck. They’re definitely all very conservative, either by personal view or views of their parents or whoever. You can definitely tell who’s with who, sort of.

What do you plan to do after you graduate from high school?

I kind of want to be a musician. I’m thinking probably rock. Right now I play violin, a tiny bit of mandolin. I’ve started guitar this semester for a school class, and I have a penny whistle. It started as listening to music, but I think back in fifth grade, I joined the school band and I played trumpet then. I definitely want to try going to college. I’ve only checked out one college, which was on a trip for this group in school. We went up to Castleton College. That looked like a pretty cool place. They have music there, so I’ve considered Castleton. I think compared to other colleges in the area it’s fairly cheap.

Do you do any extracurricular activities?

For sports, I do soccer and rowing. I used to do basketball. I think the reason I like music and sports is ‘cause those are two things I can sort of do and it’s not sitting in a seat. I feel like there’s actual progression and reward.

What do you feel is the purpose of education?

I think education is important, but it also depends. I don’t feel like you need to have an A+ in whatever, calculus, to just be able to work a normal job and make above minimum wage or anything. They teach you about all this stuff that happened hundreds of years ago, which, I like history, but they don’t really teach you about how to go and get a job, how to live on your own, pay this, pay that, when you actually have to do it. Or actually prepare you for college and to deal with that.

What is one thing your school could do better?

Some teachers are better than others. I feel like one thing they could do is, when they’re teaching about a subject, actually make it relevant. Put students in a situation where they’d actually need to use that information. Also, be more engaged with each student and more hands on.

What they want to do is renovate the whole building and add another gym. I don’t think that’s the thing to do, ‘cause then everybody’s getting taxed for another gym. I don’t feel like that’s really an answer to better education. Maybe a way to make it better and make students enjoy it more is invest in the teachers so they could go off and learn how to be better teachers. Like, take classes elsewhere and pick up new skills to use in the classroom.

What makes an effective teacher?

When they actually care about the class and help students and aren’t always like, “Work, work, work.” They either make it fun or give you time to relax or something. 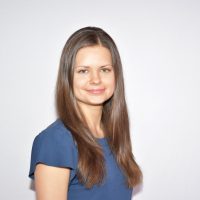 Magdalena is a freelance writer, editor and photographer in New York City currently working on an oral history of the U.S. public education system as… See Archive