More than one million asylum seekers have flooded into Europe this calendar year, 2015, and almost half of them could be granted refugee status and stay. It’s the largest refugee crisis since World War II.

But even before the current influx, immigrant populations had been growing around the world, including in host countries’ schools. Some European nations, such as Ireland, Italy and Spain, saw the share of immigrant students rise by roughly 5 percentage points from 2003 to 2012. By 2012, 11 percent of all 15-year-old students across the 34 nations of the OECD were immigrants.

So the OECD decided to look through its existing data on 15-year-olds around the world, to see how immigrant students fared during the period from 2003 to 2012, and what lessons could be passed on to policy makers to help the new immigrants succeed at school. The result was the 124-page report, “OECD Reviews of Migrant Education: Immigrant Student at School: Easing the Journey Toward Integration,” released on Dec. 16, 2015.

The OECD made one conclusion that is controversial among educators: that immigrant students who aren’t segregated into bilingual classrooms, but are immediately immersed in the host-country language alongside non-immigrant classmates, tend to perform better academically. That is, immigrant students who experience immediate language immersion at school tend to score higher on the Program for International Student Assessment (PISA) given to 15-year olds around the world.

That data runs counter to a widely held belief that immigrant children benefit from continuing to learn in their native tongues so that they don’t fall behind in math or science, for example, while they learn a new language.

The report also urges policy makers to spread immigrants broadly among schools and not cluster new immigrants together in the same neighborhood schools. That’s because immigrant communities tend to be poor, and the report found that high-poverty schools have a magnified negative effect on the education of immigrant students. Immigrant students who attend a school with high numbers of poor students tend to score lower on PISA than those who attended a school with merely high numbers of immigrants, or foreign language speakers. In other words, high concentrations of poverty are more harmful to academic achievement than high concentrations of immigrants.

But some experts in immigrant education are critical. “To me, they’re recommending a very old-school assimilationist model,” said Natasha Kumar Warikoo, a professor at the Harvard Graduate School of Education.”It completely ignores the benefits and skills that these children are bringing with them.”

Warikoo says the research literature shows clear benefits to offering a bilingual education to immigrant students. And she says it’s helpful to have clusters of immigrants in the same school, so that you have a quorum of students to provide bilingual support services to.

But Warikoo admits that in practice many school systems have failed to maintain academic excellence for students in a separate bilingual track. Often, there aren’t enough trained bilingual teachers or resources, and there’s too much poverty in the overall student body. Indeed, many school systems in the United States, from California to New Jersey, have abandoned separate bilingual classrooms for immigrant children and now integrate them into regular classes.

“Why haven’t we been able to do bilingual education well?  That’s the question we need to answer, rather than saying, ‘let’s get rid of it,'” Warikoo said. She pointed to a successful immigrant-only high school in New York City, which is part of a network of immigrant schools called Internationals Network for Public Schools, where she taught for several years. “We can replicate these successful models.”

In contrast, the OECD cited Germany, where the country has helped its immigrant students make huge gains in academic achievement by targeting extra German language instruction to them. In less than a decade, Germany reduced the share of underperforming immigrant students by 11 percentage points and improved the mathematics performance of second-generation immigrant students by 46 score points – the equivalent of more than one year of formal schooling.

We often have this paradox in education. Research experiments and small pilot projects show one conclusion, but reality shows another. In this case, bilingual education of immigrants, concentrated in one school, may be a superior model in theory. But the way it’s been implemented on a large scale hasn’t worked. And immigrant kids desperately need an education today. We don’t have time to train teachers properly and see if we can replicate successful immigrant school models on a large scale.

Other findings from the OECD report: 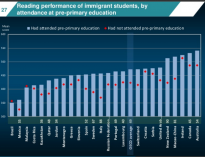