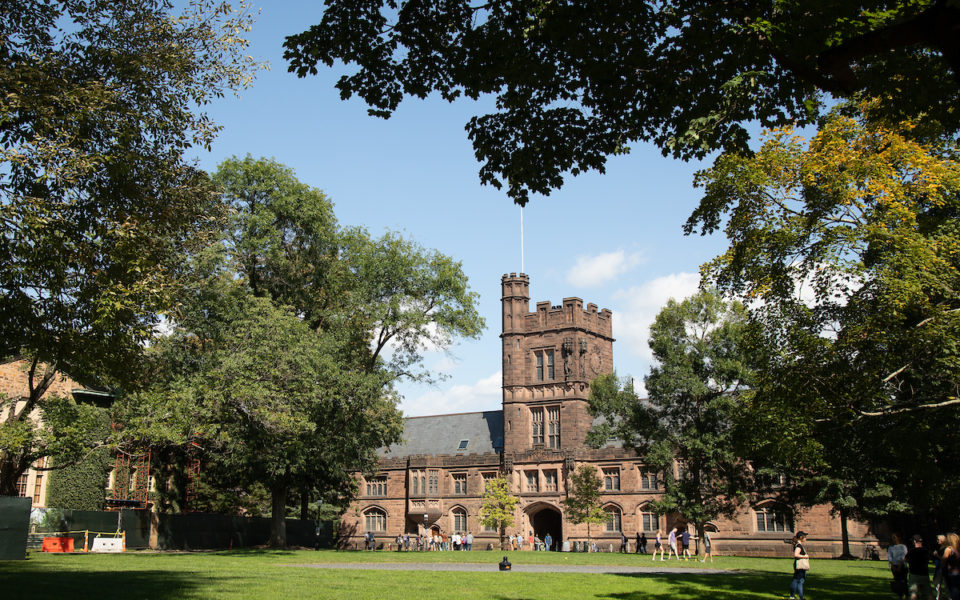 NEW YORK — D’naysha Griggs has a careful strategy for squeezing in study time while babysitting her eight nieces and nephews. The 17-year-old has about an hour after she gets to their house in Coney Island before they start bickering and she needs to put down her computer. To get back to it, she splits them up: The oldest four go off to play a game and the younger ones watch cartoons. “They have a weakness for something. And Nickelodeon is their weakness,” she said of the small ones.

Griggs is a senior at Manhattan Center for Science and Mathematics high school. When she’s not babysitting, she’s working 20 hours a week as a sales associate at Modell’s Sporting Goods in Brooklyn. She’s also taking Advanced Placement classes and applying to 14 colleges. On weekdays, she’s up by 5 a.m. to get from her Bronx apartment to her first class at 7:30. On the two weekdays she works at the sports store, she doesn’t get home until 10:30 or 11 at night — when she settles in for another hour or two of homework. She gets to bed after midnight and starts over about five hours later.

Half her paycheck goes toward college savings. Her mother works in customer service at a taxi company and would help with college costs, but Griggs doesn’t want to put that obligation on her. “I want to provide for myself. Even though my family helps me, I don’t want to be a burden,” she said. She’ll be the first in her immediate family to go to college.

“If you’re working 20 hours [a week] on a family farm or taking care of siblings 20 hours a week or of a sick relative, and you’re getting B’s and C’s, that’s really impressive.”

Griggs’ work history and family commitments might seem like key selling points for colleges that say they value grit, time management skills and maturity. But many college applications don’t give much space to that kind of experience. Admissions officers at top schools tend to value community service — the sort of activities that low-income students who are determined to help their families and find ways to save for college may not have time for.

That’s a matter of fairness, said Richard Weissbourd, a senior lecturer with Harvard University’s Graduate School of Education. It’s not just that working-class kids can’t go to Costa Rica to volunteer, as great an experience as that can be. “If you are working 20 hours [a week] on a family farm or taking care of a sibling 20 hours a week or a sick relative, and you’re getting to school and you’re getting B’s and C’s, that’s really impressive” — but too often colleges don’t recognize that, Weissbourd said.

In 2016 Weissbourd was the lead-author on a report calling on colleges to broaden their definition of community service. There’s some evidence that colleges are beginning to get the message: In October, the Common Application, which is used by about 900 colleges, said students can list “family responsibilities” in the “activities” section. But education experts say colleges still have a long way to go.

Related: University of Chicago projected to be the first U.S. university to cost $100,000 a year

For students from low-income families, graduating from college is an important way to climb the economic ladder. They especially benefit from getting into competitive schools, the sort of institutions where admissions officers carefully weigh each piece of a student’s application. An analysis for the BBC by Brookings Institution researchers last year noted that the lowest-income students get the biggest bump from attending a selective school — those who attend an Ivy-plus college (the Ivy League schools plus Duke, MIT, Stanford and the University of Chicago) earn an average annual salary of more than $160,000 by age 34. That compares to an average salary of $40,000 for those who attend a minimally selective school. But while selective universities say they want more low-income students, they still disproportionately enroll young people from affluent families. Children from families in the top 1 percent of the income distribution are 77 times more likely to attend an Ivy League college than those whose families are in the bottom 20 percent.

Many little-noticed admissions barriers keep that number from budging: the inability of poor kids to afford unpaid internships that admissions officers value, the fact that school districts in lower-income areas often get ignored in recruitment efforts, the abysmal college-counselor-to student ratios in many poor communities. Many rural areas lack high-speed internet access, making the application process a chore. Expectations around student volunteerism are another barrier that rarely gets discussed.

“We see so clearly that you have to check all the boxes” — especially extracurriculars and good grades, said Joleen Montoya Dye, a college counselor and executive director of the New Mexico-based nonprofit Bridges Project for Education. She said she is working with a “really bright” student who loves to learn and has a 3.2 GPA. The student also works long hours and is financially self-sufficient but did no community service. Dye’s read is that she’ll get into a larger, less competitive four-year state school, not a flagship.

“I knew that I didn’t have anything to put on [applications. If I just put on that I was helping my parents work, it wouldn’t look good.”

In a 2017 survey of about 240 college admissions leaders, more than half said that when they’re looking at applications, community service experience serves as a tiebreaker in choosing whom to admit. Of that group of respondents, more than two-thirds said they do so because community service shows that the student is likely to be active in social life outside class, contribute to the school’s mission and share the school’s values.

This emphasis on community service can leave low-income students facing the difficult decision of whether to give up opportunities to earn much-needed money so they can burnish their college applications. From age 10, Fiza Shaikh spent many hours after school and on weekends helping run the San Francisco hotel managed by her parents, immigrants from Pakistan. From an even younger age, she regularly joined them on errands to translate.

But she didn’t feel any of that would help her get into college. “I knew that I didn’t have anything to put on [applications],” Shaikh said. “If I just put on that I was helping my parents work, it wouldn’t look good.” So in her junior year in high school, she cut back on her work at the hotel to join student government and volunteer at a hospital and on two community programs. Now 17 and a high school senior, Shaikh is putting her volunteer work on her college applications.

Related: School counselors keep kids on track. Why are they first to be cut?

Some schools say they’re committed to changing what they look for. In March 2019, Weissbourd and his colleagues released a second report on improving the college admissions process. It notes that 140 college admissions deans have signed a letter pledging that “family commitments and obligations, such as taking care of a younger sibling or working at a job to contribute income to the family, are highly valued by our admission staff and will be considered in admissions decisions.”

Weissbourd continues to work with the Common Application group on changes. A clarification in the frequently-asked-questions on “family responsibilities” informs applicants that what they include there is confidential — important for students caring for a parent with a drug or alcohol problem, for example, Weissbourd said.

Still, the Common App’s “activities”  section gives students 150 characters — just over half a tweet — to describe their contributions outside school. And despite the deans’ letter, no hard data indicate how many schools are paying attention to the issue, Weissbourd said. “A lot of colleges out there aren’t doing anything around this, and I don’t think it’s fair,” he said. Weissbourd and the other report authors talked with high school leaders and counselors to get their responses to the deans’ letter. Though many were enthusiastic, others said they didn’t believe colleges would change their practices.

Rick Clark, director of undergraduate admissions at Georgia Tech, said his school already has. About two years ago the university added two essay questions designed to capture nontraditional contributions: One asks applicants about the role they play in their families; the other asks them to describe a typical day. Some student answers to that second question say little of interest, perhaps noting what they eat for breakfast. But others mention that they make breakfast for all of their siblings, which says a lot about how much they’re relied on, Clark said.

His staff has also changed what they look for in reviewing applications, he said. Five years ago, the buzzwords were “well-rounded” and “leadership.” Now they’re looking for the students whom their families and communities depend upon — not just the baseball team captain or club president but the older sibling who is taking care of younger family members.

More students might highlight their nontraditional contributions if they had a counselor to guide them. Giuseppe Basili of the Jack Kent Cooke Foundation says this year his organization selected a student for a scholarship who had little community service to report because he was working no less than four jobs to pay the family’s mortgage. But the foundation learned that detail only because his guidance counselor shared it — the student didn’t discuss it on his application. (The foundation is one of The Hechinger Report’s many funders.)

Help like that was what got Griggs through her college applications. At the end of her junior year she applied and was accepted to Bottom Line, a program that pairs college counselors with low-income and first-generation applicants. Griggs had completed a resume in an English class, and her Bottom Line advisor, Kamala Moore, told her to attach that to her applications. Moore said they captured Griggs’ babysitting time in the Common App by describing her as a “caregiver.”

The 14 schools Griggs has applied to are all in-state — a mix of public and private colleges. She wants to major in education, in part because a sixth-grade English teacher inspired her to go to college. In applying, she wrote three separate essays, producing multiple drafts of each to respond to comments from Moore and one of her English teachers, then picking the best of the three.

She also had to follow up with admissions offices to find out if they were missing anything, which meant staying on top of teachers and counselors about sending in recommendations, test scores and transcripts. Now she’s in the middle of the financial aid application process, another exercise in assembling documents, although she’s getting help from Moore. She plans to start visiting colleges this month.

“Some [colleges] already contacted me for interviews, so that’s good,” she said.

This story on college applications was produced by The Hechinger Report, a nonprofit, independent news organization focused on inequality and innovation in education. Sign up for Hechinger’s newsletter.